The Truth About Alcohol (Netflix) – Review

Dr Javid Abdelmoneim investigates the truth about alcohol. This is following the new UK guidelines of 14 units/week of alcohol for men.

The Truth About Alcohol (Contains Spoilers)

Dr Javid begins by tracking his alcohol intake with a tag fitted to his ankle. This measures the alcohol concentration in his sweat levels. Why not pen and paper? He’s in a pub drinking out of pint glasses, not consuming some ‘potion’ at a house party while playing Circle of Death.

Next up is a liver scan, where we learn that exceeding the current weekly limit increases the risk of alcohol related liver disease.

Onward to a pub where games have been set up to test various attributes of drinkers. Alcohol has a negative effect on balance, hand eye co-ordination and impulse control. It also impairs multi-tasking and increases pain tolerance due to a numbing effect. We meet Stuart, one man who’s had 3 pints and can tolerate more than most in the “hand in ice bucket” challenge. 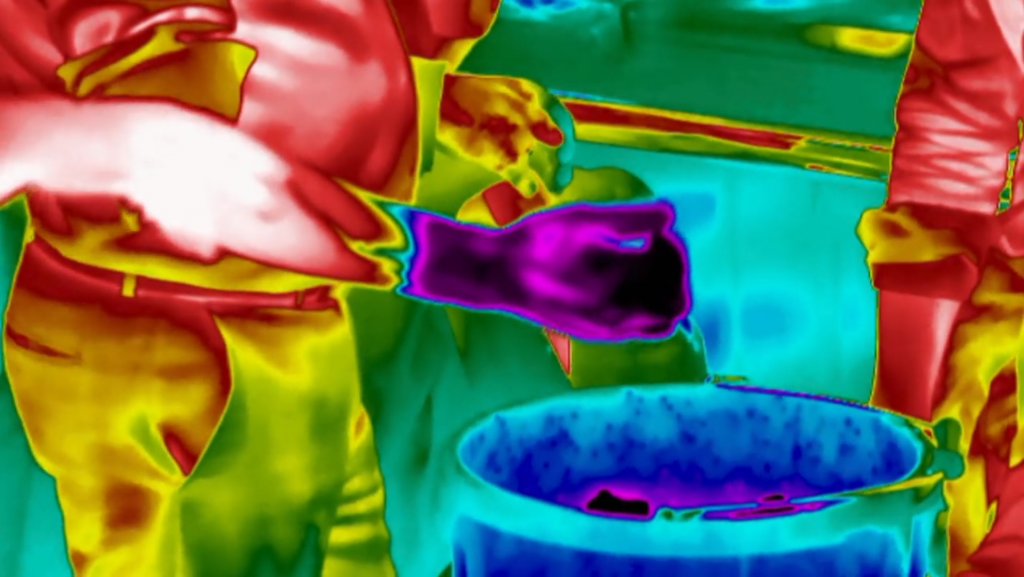 “The Iceman” Stuart wanted clarification that he was hard as nails before agreeing to remove his hand from the icy water.

With the use of a heat camera we see that alcohol increases the flow of warm blood to your skin. In reality this makes your body cooler, which is contrary to the “beer jacket” effect of not feeling the cold as much after a few drinks. The numbing effect of alcohol likely plays its part here too.

We then meet five volunteers, a self professed “heavyweight” drinker (far left) down to two women who get drunk very easily. Using a bod-pod they determine the total volume of water in each subjects body. I found this really interesting, particularly the notion that with more water contained in muscle than fat you would feel the effects of alcohol less as your muscle mass increases. The largest guy was measured at 66 litres of water, which is a litre more than both the women combined. The research shows that the higher the volume of water in your body, the less you feel the effects of alcohol. 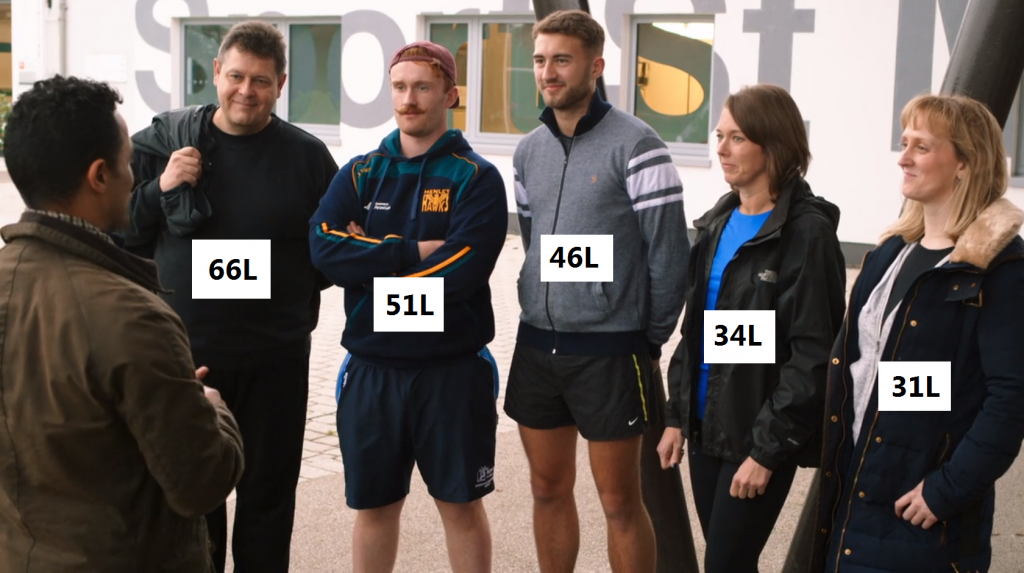 Total Volume of Water in Each Subject (litres)

Dr Javid runs a “study” with two groups of men, showing that those given 2 pints of beer vs. 2 pints of low-alcohol beer consumed 11% more crisps and nuts per person. Rant: This is an awful illustration of what’s been shown in the research. The individual variation in snack consumption could easily account for the difference in the two groups of seven guys. He then includes the alcohol calories when presenting the results, which is hardly measuring behaviour since you chose their drinks. The difference of “300 extra calories” per person would otherwise have equated to the subjects eating around 2,700kcal each in snacks. In fact two low alcohol beers would be ~160kcal vs. ~400kcal for the regular ones, so there’s 80% of your observed difference. Either way, alcohol increases appetite.

My favourite gadget appears in the next part, where a pill-sized camera is needlessly swallowed so we can see the meal reach his stomach. I was happy to take it at face value that if I see him put food in his mouth, chew and swallow, it would in fact reach his stomach. Nonetheless, a very cool bit of kit (though likely some graphic footage from digestion to…retrieval). Dr Javid and his dinner-dodging friend then use a breathalyser through the evening to show that eating a meal appeared to slow the alcohol from entering the bloodstream. The effect was around a 50% reduction in peak concentration and the alcohol was faster to leave his system entirely.

The health benefits of red wine are investigated, with a scan showing that blood vessels do dilate following a glass of red. This effect is beneficial and would help to lower blood pressure. The reason behind it is the polyphenol content and a good rule of thumb is the darker the wine, the more polyphenols it contains. The conclusion is that it’s not worth drinking red wine just for this micro-nutrient boost. Equivalent doses can be obtained from drinking coffee, tea, pomegranate juice or eating blueberries, dark chocolate or walnuts. If you’re interested, here are the 100 best sources of polyphenols.

Over 5 million Brits use alcohol to get to sleep (survey). Javid attends a sleep lab where he consumes a double whiskey before bed. It’s noted that he does get the benefits of falling asleep faster and initially deeper too. However, the second half of the night is highly disrupted and restless. The conclusion is that there’s a reduction in overall quality of sleep with ingestion of alcohol. (Note: a similar effect is observed from those falling asleep in front of blue light emitting devices like TV’s and laptops. Despite someone finding it “easier” to get to sleep, overall quality of sleep is lower.)

Hangover cures are tested next, and to my surprise he’s heard of the term “control group”. Ingestion of a Borage oil capsule (rich in the fatty acid GLA) prior to drinking was more effective at reducing hangover symptoms than eating a morning fry up. 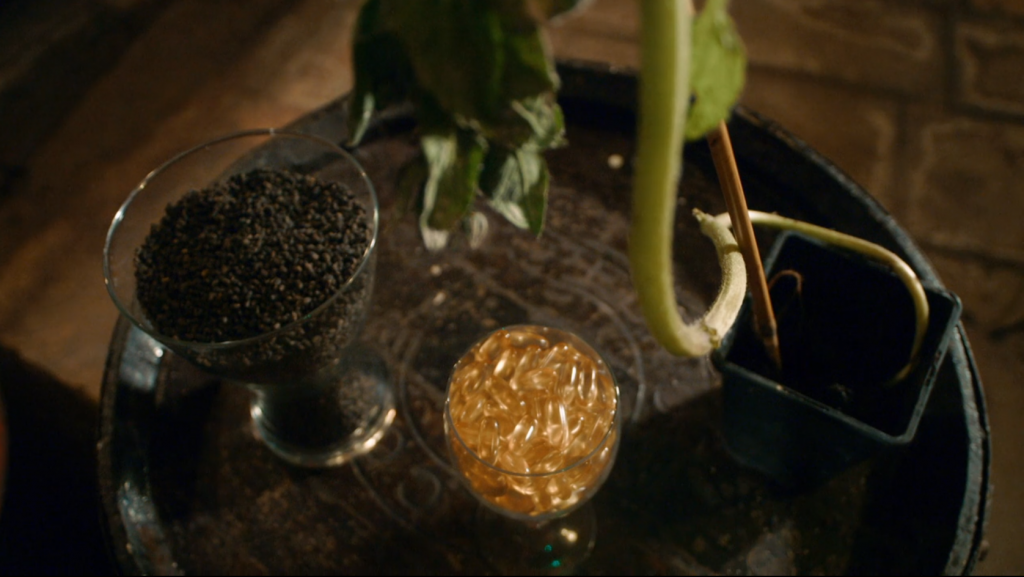 The severity of a hangover is in part down to the congener content of the alcohol. All else being equal, brandy and red wine may produce worse hangovers due to their high congener levels. At the other end of the scale, white spirits such as vodka, gin and rum are congener-free. This chemical only plays a minor role in the intensity of a hangover compared to other factors such as total intake.

The final minutes are an interview with England’s Chief Medical Officer Professor Dame Sally Davies. She explains that alcohol is a carcinogen as it damages cells and increases oestrogen levels. While 11% of all women will get breast cancer, this increases to 13% if they consumed the guideline weekly alcohol intake of 14 units. Taking on 28 units/week would increase incidence to 18%. Lastly, women over 55 who drink up to 5 units per week experience a cardio-protective effect, though any benefit has disappeared by the time the guideline 14 units/week are consumed.

Despite the annoyingly flawed studies he sets up, I enjoyed watching this and learned several new facts about alcohol. 6.5/10